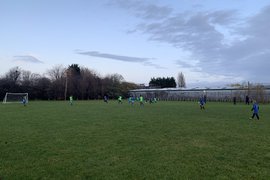 After losing their first game of the season, the boys were keen to get this game underway with the intention of turning their good play in the previous match into a more positive result. This was clear from the beginning as Shadwell took an early lead through a goal by Tom W. We were soon able to add a second, and two more before halftime to give the team a 4-0 win at halftime. The second half was used to try out different players in different areas of the pitch and although Alwoodley were able to pull a couple of goals back, we also added a fifth to make the final score 5-2 to Shadwell. A great first win for the boys, and they will look to build on this when they host St Urban’s next week. 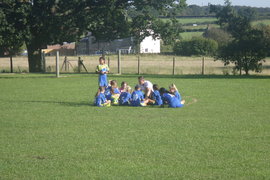 After getting a credible 1-1 draw against Meanwood in their last match, the girls hosted Grimes Dyke tonight as they looked to get their first win of the season. The team played brilliantly, and were able to attack from the beginning, with goals from Lily and Emelia. Further goals in the second half from Rakhi and Sofia (2) gave the girls a fantastic first win of the season. Everyone played their part in the victory and we hope to continue this good form into the season!

It was the boys’ second team’s turn to play tonight as they hosted Immaculate Heart. After having a couple of games postponed due to poor weather conditions the boys were keen to get their season underway. Even though the result didn’t go in their favour, you can’t fault the boys’ effort and enthusiasm; each and every one worked their socks off where other teams would have folded; there were still positives to take from the game and the boys will continue to work hard in the next game and beyond.

The girls’ 2nd team played their first game of the new season as when they hosted Deighton Gates on Thursday. The girls were looking forward to playing their first game together and showed great energy and enthusiasm from the beginning, with committed defending and some great saves in goal from Khadija. The girls were able to take the lead when a through ball from Evelyn allowed Olivia R to run through on goal and shoot low into the bottom right passed the goalkeeper! Even though we ended up losing the match, all the girls were able to show they wanted to play and take responsibility for what happened on the pitch. It was a great game to be a part of and despite losing, there were lots of positive aspects to take from it! 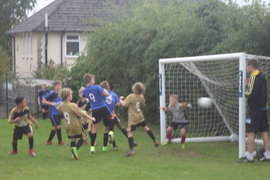 On Monday it was the boys’ turn to get their season underway as they made the journey to St Paul’s. It took the boys a bit of time to settle down and get comfortable, as it was their first time playing together. At halftime St Paul’s were leading 2-0, and although Shadwell had chances, they were restricted to long range. We looked a lot more settled in the second half, and despite conceding a long range strike to fall further behind, the boys showed great character and potential as they began to pull back the deficit through Tom’s header from a corner. As well as scoring a second through Oliver’s shot from outside the box, the boys ran out of time to find the equaliser. Despite losing we showed a lot of heart to come back into the game, especially as it was our first match playing together. We tried to play good football and it’s only going to get better from here! 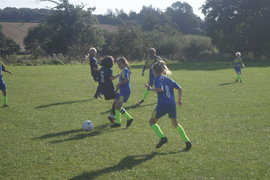 The girls’ football 1st team got their season underway last night as they hosted Meanwood on the school field. With an entirely new squad of 10 the girls were eager to get the game started. It certainly showed when we were able to take the lead within the first minute; great work on the ball from Rakhi saw her find Holly who shot high into the net! Meanwood were able to grab an equaliser and it was unfortunate from a Shadwell point of when the goal came straight from a corner kick which found its way all the way through. The girls showed lots of resolve and teamwork to not let it get the better of them, and despite lots of Meanwood pressure in the second half, held their own to grab a great point to start the season! 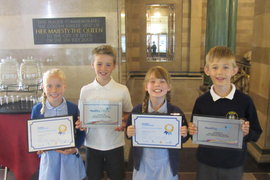 To finish the year, both Bramham and Shadwell took pupils to the Health & Well-being presentation event at Leeds Town Hall to accept the Healthy School’s Award and the MindMate Friendly achievement. It was a great day and a brilliant recognition of all the hard work the Federation does to help our children in all areas of their lives! 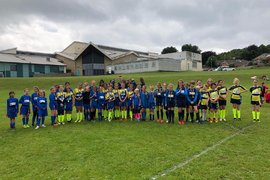 This year we were able to take every girl in Y5 & 6 to the Leeds Finals Competition. The competition itself had been postponed from earlier in the season because of the weather, merging the Regionals with the Finals to form one big end of year competition. We had three teams entering, and with the best teams in the city in attendance, each team was successful in their own right. The Shadwell C-team were able to qualify out of their group and make it all the way to the quarter finals, showing the willingness to take responsibility and push themselves to do their very best! Our B-team also qualified from their difficult group by winning all of their games, their quarter-final, and their semi-final. They showed great resilience and maturity in challenging situations. In the final they met the Shadwell A-team, who had also won all their games so far, making the final an all Shadwell affair. With both first and second places already sealed, the girls made the final an enjoyably competitive match. It was clear both teams wanted to win and call themselves the best in Leeds and in the end, it was Shadwell A-team who narrowly came on top, winning the Leeds Finals for the 5th YEAR IN A ROW! Also not losing a competitive game in those five years, is an incredible achievement! To have all our teams do so well in the competition was just a brilliant way for a truly tremendous group of children to end their primary school experience; we’ve always been, and will continue to be, so proud of our children! Well done girls! 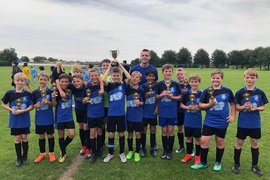 What a way for the football team to end their season, by competing in the Leeds Final! Just to get to this stage was a great achievement; it’s been a long road for the boys and they’ve overcome a lot of setbacks and tricky situations to be here. They were playing Holy Family, a great school for sport and the team that had previously beaten Shadwell in the Cup Final earlier in the season. The boys, understandable with the occasion, got off to a shaky start, needing to settle into the game. We struggled to get out of our own half for the first part of the game as Holy Family applied pressure and took a few corners. Still towards half time was when Shadwell were able to mount some pressure of their own, and even took the lead! Unfortunately, Holy Family were able to equalise straight away, meaning the joy was short lived, and when a Shadwell penalty hit the bar just before the break, the team went in with mixed feelings at half time. On the one hand they had withstood heavy pressure and handled it well. On the other they could argue they might be 2-0 up on another day. Still, the scores were level, and the focus had to be on the second half as they entered the next 20 minutes of football. Defensively, we were doing really well, restricting the opposition to mainly long range shots and using our pace and passing to create attacks of our own; and when Gabriel finished an attack down the left to make it 2-1, it was on the opposition to come and apply even more pressure, allowing us to use that space even better. Dan B added a third soon after and the boys managed the situation brilliantly to secure the result! The game finished 3-1 and meant for the first time in school history, Shadwell had the best boys football team in Leeds! A tremendous achievement which the boys had strived for, and definitely didn’t come easily! What a great end to the season! 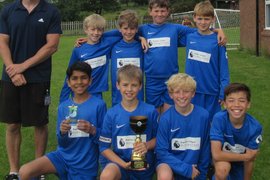 Having qualified by winning their previous round, the Y5 Dodgeball team competed at the Leeds Finals alongside the other best teams in the City. In an action-packed competition with lots of intense moments, the boys kept their cool, bringing back games from losing positions and making key plays when it counted! The results saw us win our group and qualify for the final! In the final it was a best of three format. We were able to win the first game, but just lost the second right at the end to take it to a deciding final three-minute match. A close game to start with, the team made some brilliant catches to swing the momentum and then capitalised with some great counter shots to win the final, and the tournament overall! Making them the best team in the whole of Leeds! Well done boys, you really earned it! 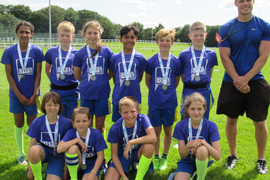 Having qualified from the Leeds Finals in May, the team were now one of four to represent the whole city at the West Yorkshire Finals against the best teams from Bradford, Wakefield, Kirklees and Calderdale! In what was quite possibly the best Tag Rugby team performance ever, the children won their group matches 4-1, 4-1, 9-0 and 5-1 to set up a quarter final match. The team were playing brilliantly and won the quarter final 6-3 and the semi-final 5-1 to set up a final match. Even though the children lost the final 4-3, their play throughout was absolutely tremendous; the best teams in the whole County were in attendance and to finish 2nd, out of around 750 teams which had took part throughout the year was amazing, and the best Shadwell had ever done! Credit goes to this fantastic team and what they’ve achieved, how they’ve achieved it, and the way they’ve worked together! 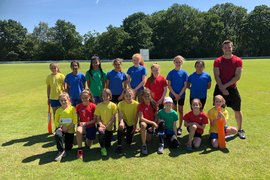 For the first time, we entered the Leeds Girls Cricket Tournament this year, and were able to take all the girls in Y6, forming two teams. Despite having limited experience playing competitively, the girls did brilliantly, winning their games and having great fun doing so. Both teams got the results they were hoping for, eventually finishing first and third overall and the winners qualified for the Yorkshire Finals as a result! It was a great day out full of enjoyable moments!