In their latest league outing some of the Y5 squad played a match vs Scholes on the school field. Even though the result didn’t go the way the players would have hoped for, we are still learning during games and the way the players deserve a lot of credit for the way they conducted themselves and had a good time despite losing.

The team played their latest league match this week as they travelled to Manor Wood. Despite going 1-0 down the team stayed resilient and battled back with some excellent passing goals to claim a great 3-1 win! The result also takes the team to top of their league on goal difference!

On Tuesday our Y5 Cup team travelled to St Theresa’s for the first round of the cup. In an action packed game the team played brilliantly and were able to overcome setbacks to ultimately get the win and therefore qualified for the next round!

The boys’ 1st team played their latest league match at home vs Allerton this week. After getting off to a brilliant start, with two goals in the first five minutes, we were unable to add to the lead throughout the first half. Our creation of chances continued into the second half, although Allerton were able to score two goals within a manic 30 seconds to bring the game level. Even though we settled down from that point on we were unable to take the lead again. Still, the team showed good character to regain their focus and we will continue to push ahead in the league when we travel to Manor Wood next Thursday.

Our Y4 team played their first match of the season this week as they travelled to Manor Wood in the first round of the cup. It was all the players’ first time playing for school and not only did they all play very well but they also represented the school in a tremendous manner, showing super sportsmanship throughout the game! By managing to win the tie it also means that they qualify for the next round for after half term! What a great result!

It was the turn of the second half of Class 5 to participate in their football league match this week as they made the journey to St Augustine’s. Despite applying some pressure early on we were unable to find a breakthrough and the opposition took the lead even with some valiant defending and goalkeeping! We were able to get a goal back during the second half and were unlucky to not have scored more; pushing forward with multiple efforts and well worked chances. Still just like the other Y5 game, we are trying to get as much experience as possible and learn from it for future games.

On Monday our girls’ football 1st team travelled to Football World for the West Yorkshire Qualifiers. The team did really well to adapt to a style of football they weren’t used to, with the ball never going off the pitch and bouncing off the walls. Although we were able to win some games, we also came up against some very strong opposition and with only one team being able to qualify we just missed out. Still, it was a great learning opportunity for the team!

The Y5 squad played their first match this week as they hosted Grimes Dyke in the league. With the whole Y5 class wanting to play we split them in half, with some of them playing today and the rest playing next week. In tricky conditions they were able to give their very best, bringing the score back to 1-1 from a losing position. Eventually Grimes Dyke were able to pull away and claim the victory, but it wasn’t because of lack of effort from our Y5s; everyone played their part in a great team performance!

In their final league game before Christmas the girls put in another good performance against a strong Farlsley Farfield team and were able to take the lead when Amaya’s great through ball set up Lily for the finish. Although Farlsey had their chances, it was only right in the last minute when they were able to equalise. A disappointing way to finish the game from a Shadwell perspective, but also a great learning experience for the girls and something which they will be able to grow from in the future. 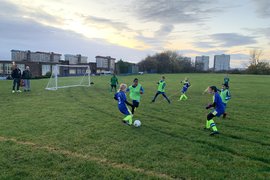 Both Shadwell girls’ football teams had games this week, with the 1st team travelling to St Patrick’s for a league game. St Patrick’s, who were second in the Leeds League, were bound to be difficult opposition, and so it proved as it was difficult for the girls to break them down. The breakthrough was made when Rakhi scored two great goals to give us a 2-0 lead going into halftime. Despite leading, the girls had to defend well and Grace in goal made a number of brilliant saves! The second half was also close, with the third and final goal only being added towards the end, when Rakhi’s run and cross down the right was finished first-time by Amber! A great win for the girls, who keep their place at the top of the Leeds League, and they’ll need another good performance if they hope to beat Farsley Farfield in their final league game of the year next Tuesday. 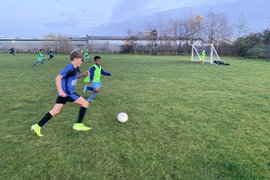 The boys also travelled to St Patrick’s on Thursday, but theirs’ was a cup game. Just like the girls, they were able to get a great win, with the game finishing 4-0. The boys are therefore through to the next round, and wait to see who they will play. It was brilliant to have both the boys’ and the girls’ teams playing on pitches right next to each other, and both playing so well!

This week it was the turn of the girls’ football 2nd team to play, at home vs Bramham in a friendly game. Despite losing, there were lots of positives to take from the game, and we also scored a great goal! It was a really useful learning experience for the team, who are desperate to play further fixtures after Christmas!