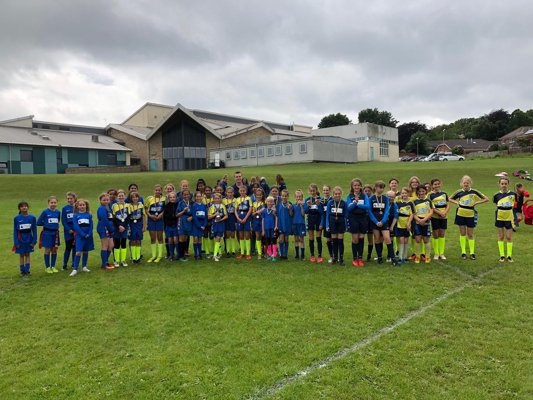 This year we were able to take every girl in Y5 & 6 to the Leeds Finals Competition. The competition itself had been postponed from earlier in the season because of the weather, merging the Regionals with the Finals to form one big end of year competition.
We had three teams entering, and with the best teams in the city in attendance, each team was successful in their own right.
The Shadwell C-team were able to qualify out of their group and make it all the way to the quarter finals, showing the willingness to take responsibility and push themselves to do their very best!
Our B-team also qualified from their difficult group by winning all of their games, their quarter-final, and their semi-final. They showed great resilience and maturity in challenging situations. In the final they met the Shadwell A-team, who had also won all their games so far, making the final an all Shadwell affair.
With both first and second places already sealed, the girls made the final an enjoyably competitive match. It was clear both teams wanted to win and call themselves the best in Leeds and in the end, it was Shadwell A-team who narrowly came on top, winning the Leeds Finals for the 5th YEAR IN A ROW! Also not losing a competitive game in those five years, is an incredible achievement!
To have all our teams do so well in the competition was just a brilliant way for a truly tremendous group of children to end their primary school experience; we’ve always been, and will continue to be, so proud of our children! Well done girls!