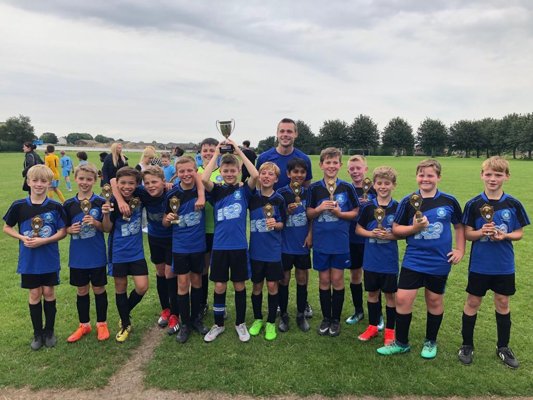 What a way for the football team to end their season, by competing in the Leeds Final! Just to get to this stage was a great achievement; it’s been a long road for the boys and they’ve overcome a lot of setbacks and tricky situations to be here.
They were playing Holy Family, a great school for sport and the team that had previously beaten Shadwell in the Cup Final earlier in the season. The boys, understandable with the occasion, got off to a shaky start, needing to settle into the game. We struggled to get out of our own half for the first part of the game as Holy Family applied pressure and took a few corners.
Still towards half time was when Shadwell were able to mount some pressure of their own, and even took the lead! Unfortunately, Holy Family were able to equalise straight away, meaning the joy was short lived, and when a Shadwell penalty hit the bar just before the break, the team went in with mixed feelings at half time. On the one hand they had withstood heavy pressure and handled it well. On the other they could argue they might be 2-0 up on another day.
Still, the scores were level, and the focus had to be on the second half as they entered the next 20 minutes of football. Defensively, we were doing really well, restricting the opposition to mainly long range shots and using our pace and passing to create attacks of our own; and when Gabriel finished an attack down the left to make it 2-1, it was on the opposition to come and apply even more pressure, allowing us to use that space even better. Dan B added a third soon after and the boys managed the situation brilliantly to secure the result!
The game finished 3-1 and meant for the first time in school history, Shadwell had the best boys football team in Leeds! A tremendous achievement which the boys had strived for, and definitely didn’t come easily! What a great end to the season!