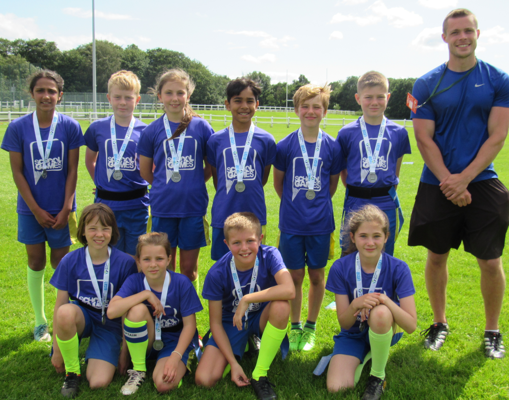 Having qualified from the Leeds Finals in May, the team were now one of four to represent the whole city at the West Yorkshire Finals against the best teams from Bradford, Wakefield, Kirklees and Calderdale!
In what was quite possibly the best Tag Rugby team performance ever, the children won their group matches 4-1, 4-1, 9-0 and 5-1 to set up a quarter final match. The team were playing brilliantly and won the quarter final 6-3 and the semi-final 5-1 to set up a final match. Even though the children lost the final 4-3, their play throughout was absolutely tremendous; the best teams in the whole County were in attendance and to finish 2nd, out of around 750 teams which had took part throughout the year was amazing, and the best Shadwell had ever done! Credit goes to this fantastic team and what they’ve achieved, how they’ve achieved it, and the way they’ve worked together!