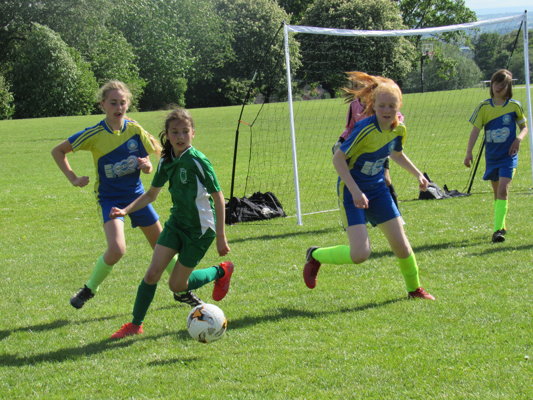 Once again, we were able to take all the girls from Y5 & 6 to the annual St Bart’s Football Tournament at Goals. It was a great day out, with all children able to take part and compete together; all three of our teams played well and we had some tremendous results! The tournament itself contains over 80 teams, with only 16 making it to the next round, so the standards are high and qualification is tough; especially as all the games take place in cages where the ball doesn’t go out which is a different style to what the girls are used to!
Even though they didn’t qualify, our C-team played well together and took responsibility in order to do their best; with some great games against difficult opposition they should be very proud of themselves. They showed a great deal of enthusiasm and desire!
Our B-team actually qualified from their group, winning it out of the 7 teams in it! This showed our strength in depth as a school and they were unlucky in the knockout round, narrowly losing to a good Immaculate Heart team on sudden death penalties. They got just as far as any Shadwell team had done previously, which was a great achievement!
Our A-team also won their group, and were able to win their first-round knockout match, taking them to the quarter finals; the furthest a Shadwell team had ever got! Although they lost a hard-fought game to Woodlesford, it was a fantastic effort from the girls and a brilliant journey to get that from throughout the day. It was also the last time the girls in Y6 would play football for school; it’s been a truly historic season for girls’ football at Shadwell and they’ve not only played so well but also done it the right way with tremendous sportsmanship and teamwork throughout! Well done girls, we are very proud of you all!