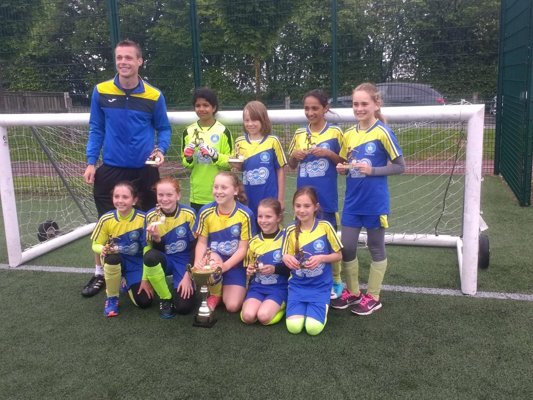 Last night the girls’ football team competed in the Leeds City Football Finals at Priesthorpe High School. We played St Paul’s Primary in the semi-final where, despite the wet weather, the girls got off to a brilliant start when some good work from Jess on the left found Megan to score and take a 1-0 lead! Even though St Paul’s equalised the team kept going and took the game to extra time and then penalties, with a great tackle from Emily in the last minute keeping the scores level. Gopika made two brilliant saves, while Emily and Sukhmann scored their penalties to win the shoot out!

In the final we played Holy Family; it was a really tough game, and both teams had beaten each other in the league earlier in the year. With the last kick of the first half, Jess gave Shadwell the lead. Even though Holy Family piled on the pressure in the second half, great saves from Gopika and committed tackles and hard work from literally everyone kept their attack at bay. With time winding down, Megan won a tackle on the left side, battled with her marker to dribble to ball across the end line and shot into the net to make it 2-0! It was an amazing goal, and quite possibly goal of the season!

The score finished 2-0 and meant Shadwell officially have the best Girls’ Football team in Leeds! Well done girls for all your hard work and amazing togetherness all season!