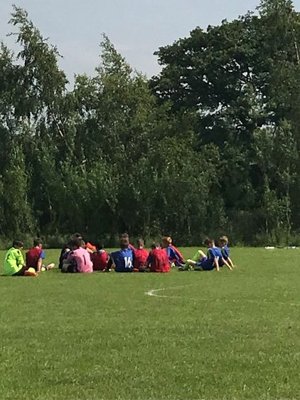 Last night the boys’ team travelled to St Peter’s for their last 16 cup tie. Although it was on a smaller pitch than what we’re used to, the boys were able to play to the conditions and carved out some good chances in the first half; Alex had a great shot well saved by the opposition goalkeeper.

Franke also made some good saves in goal for Shadwell when St Peter’s attacked. The saves were especially well made as the ball zipped off the quick surface. The halftime score remained 0-0.

The second half started much of the same and although the boys were able to create some chances early on, the pitch was increasingly more dominated by St Peter’s who were able to make a breakthrough when a low cross was turned in by their striker. As Shadwell pushed forward for the equaliser, they were caught on the break towards the end as St Peter’s doubled their lead.

Unfortunately for the team the final score remained 2-0 and although we gave it everything, we just didn’t get the breaks on the day. Still, credit to St Peter’s who played a great game and we wish them lots of luck in the rest of the competition.