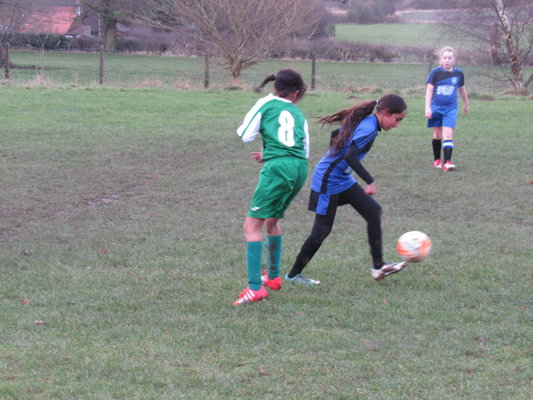 The girls got the new year underway early this season as they travelled across Leeds to Holy Family, who themselves are having a great year. Because of the weather conditions, the game was played on astro turf at the school, which meant a shorter yet wider goal as well as no throw ins or goal kicks. Despite the different playing surface, the girls adapted well after going a goal down early on. Even after conceding a couple more, an effort from Jess reduced the score to 3-1 at halftime.

The second half saw the wind pick up, and although the conditions became worse, Emily’s effort part way through the half made the score line 3-2. Just when it looked like Shadwell could bring it all the way back, two quick goals from Holy Family all but put the game beyond doubt. A great goal from Jess was another Shadwell highlight towards the end, but home advantage ultimately paid off for the opponents in a deserved win for them.

Nevertheless, the team gave a great effort, and knew that this game was as probably as tough as it’s going to get for the foreseeable future!